A talk given and translated by bhikshuni Heng Yin on December 21, 2006 during the Amitabha Session at The City of Ten Thousand Buddhas.

While we are reciting the Buddha's name and seeking rebirth in the Pure Land, we can also try to create a Pure Land on Earth. How many people have watched "An Inconvenient Truth"? This film was produced by the former Vice President Al Gore. It seems that the majority of people here have not yet seen this film. We will be showing this movie at the Buddha Hall on January 27. There will be Chinese translation as well.

This film focuses on the issue of global warming. It shows how our current human lifestyle is destroying the world icecaps are melting and ocean will rise 20 feet and flood many highly populated areas if we don't change our lifestyle. This is certainly the Saha world and not the pure land.

Al Gore suggests 10 things you can do to stop global warming and reduce CO2 emissions:

Avoid products with a lot of packaging

Be a part of the solution

But actually, CO2, emissions may not be the main cause of global warming. Many other greenhouse gases trap heat far more powerfully, the most important is methane, which is 21 times more powerful than CO. The number one source of methane worldwide is animal agriculture, which produces 100 million tons of methane per year, and rising because global meat consumption has increased fivefold in the past 50 years. Conclusion: The best way to reduce global warming in our lifetimes is to reduce or eliminate consumption of animal products by becoming vegetarian or vegan.[1]

Of course it's harder to ask people to become vegetarians, because it is very hard to change our dietary habits. We first have to understand the rationale, and then we can change our behavior. Just as in the Avatamsaka Sutra lecture earlier, it was mentioned that among the four stages of faith, understanding, practice, and certification, the text on the stage of understanding is very long, whereas the stage of practice is covered in a single chapter. How can a Buddhist philosophy help bring about a change in thinking and lifestyle towards the earth?

Whereas the Western Christian attitude was that man dominates nature and nature exists to serve man's purposes, the Buddha taught that human beings have also reincarnated in other (e.g. animal) forms, and that we should respect all forms of life because they have the potential to become enlightened.

Moreover, all living things are fundamentally interconnected, and to harm any living thing, not to mention an entire ecosystem, is to harm oneself.

The moral precepts of Buddhism can be applied to ecological circumstances, e.g.:

Killing: To release toxins into the air, water, or land is to kill living beings slowly.

Stealing: To cut down forests or to develop pristine regions is to rob many living beings of their homes and lives.

Lust: To excavate and consume giant quantities of oil, coal and other minerals and resources, is to rob the earth of its treasures, which have been developed over millennia and could be used sustainably to support many more generations into the future. At the rate we are going, we will use them up in a few decades. The scars left on the land from mining are comparable to scars left from violence done to a human being with a knife. Some have called the recent bill to open the Arctic National Wildlife Refuge for oil drilling the "Rape the Earth" bill.

Lying: Some politicians, supported by special interest groups or big business that wish to exploit nature, will fabricate lies or ignore the truth of environmental devastation as they pass bills allowing environmental standards to be waived, weakened, or violated. This amounts to lying and cheating the earth.

Intoxicants: Intoxicants disrupt the normal functioning of our minds and bodies. Thus, under this definition, genetically modified foods and foods heavily laced with hormones and chemicals might be regarded as intoxicants. The toxins poured into lakes, streams, and the groundwater could be considered intoxicants that actually kill living beings, and injure ecological health.

The Venerable Master compared the earth to a human body, with streams as its blood veins, vegetation as its hair, geothermal energy as body heat, and earthquakes and other natural disasters as symptoms of illness. If people regard the earth as a living being or system, they will certainly treat it with respect and avoid activities that harm it.

When people adopt a Buddhist value system and approach to life, they will avoid the above actions and not seek to extract nature's resources for profit Instead, they will live simply and in harmony with nature and all living beings. In order to protect ecosystems, they will prefer local community-based economies using locally produced food and resources.

As such, CTTB is like a Pure Land in that we have a wild, natural, organic farm that not only grows organic food but also supports wildlife, we do not need to drive on campus, we try to reuse and recycle nearly everything. Most important, everyone here is trying to purify their own mind.

Here I'd like to share some stories about animals that cultivate to drive home the point that all beings have the Buddha natures. In 1980, Fujian, a shepherd boy said to an ox, "Tomorrow you will be sold to a butcher." The ox immediately shed tears and knelt on its front legs. The shepherd boy told his parents and the local government officials to come and watch, and then the ox knelt and begged for mercy. Everyone pitied him, collected some money to buy him and send him to a monastery to be liberated. After the ox moved to the monastery, he enjoyed listening to lectures on the sutras and bowing to the Buddhas. Whenever he saw laypeople come to the monastery, he would bow in gratitude to them. At the end of his life, he knew in advance the time of his death. He slowly walked to the meadow and lay down. After half a day, he went off to rebirth. It was the 13* day of the 10" lunar month, 1993. He was buried at the location where he passed on. 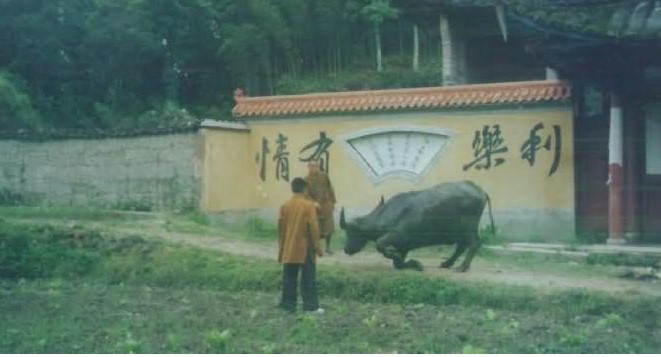 In 1987, a green-feathered, red beaked parrot from Le Shan, Sichuan Province, was brought to Baotou City, Inner Mongolia. Because he was a dumb parrot that couldn't speak, and he would peck at people who tried to train him, he was an unpopular parrot. Eventually he was given to an Elder Layman Wang to raise. Elder Layman Wang's entire family was devoted to Buddhism and loved all kinds of animals and small creatures. They raised many abandoned cats, dogs, goats, doves in their home. After the parrot joined their family, he heard tapes of Amitabha Buddha's name and Guanyin Bodhisattva's name being recited all day long, and his temperament became more gentle. Several months later, the parrot that couldn't learn anything before, began to recite the Buddha's name! He would say, "Namo Amitabha Buddha! Amitabha! Buddha, Buddha, Buddha! Namo Guanshiyin Bodhisattva! Guanyin Buddha!" etc. His voice was clear and pleasant. Often he would add, "Hurry and recite Buddha! Brother, recite Buddha! ["Brother" is his nickname], "Hey, how about reciting Buddha?"

Every day when his owner did the morning and evening recitation, the parrot would follow along. Whenever someone recited a sutra or the Buddha's name in the Wangs' Buddha Hall, he would join in. Even when his owner was reciting silently in his mind, the parrot would know it and recite for as long as his owner did. The strangest thing was that aside from reciting the Buddha's name, he still couldn't be taught to say anything else. The Wang family welcomed many Buddhists to their home to practice together, and every day there was a lot of chatter in the house. However, the parrot never learned common phrases such as "How are you? Please have a seat," which people tried to teach him. He'd only say, "Let's recite the Buddha's name? Namo Amitabha!"

One day in May 1998, the parrot was frightened by something, and stopped eating after that. He continuously had diarrhea until the next day. As the end of his life approached, he recited the Buddha's name with his owner, and one could faintly hear the syllables "Namo Amitofo" in his throat. After he went to rebirth, his body remained soft and his feathers glossy, as if he were still alive. Elder Layman Wang and his whole family recited for him for 12 hours. They invited an elder Dharma Master from Wutai Mountain to preside at the cremation ceremony, which over a hundred laypeople heard about and flocked to attend. It was a magnificent ceremony. After the cremation, they found the parrot's tongue intact and more than 20 pearly white sharira clusters with tiny red flecks, plus several dozen sharira seeds.

This, along with many other stories of animals in Buddhism, goes to show that the wisest to dumbest creature can all benefit from reciting the Buddha's name. It also shows that all living beings have the Buddha nature and can become Buddhas.

1. ' Mohr, Noam, "A New Global Warming Strategy: How Environmentalists are Overlooking Vegetarianism as the Most Effective Tool Against Climate Change in Our Lifetimes" August 2005 An Earthsave International Report.