THE BUDDHA SPEAKS THE ULTIMATE EXTINCTION OF THE DHARMA SUTRA 1

From the Seng Yu Lu2 Translator anonymous.
Appended to the Sung Annals.3

Thus have I heard. At one time the Buddha was in the state of Kushinagara. The Tathagata was to enter Nirvana within three months and the Bhiksus and Bodhisattvas as well as a great multitude of beings had come to pay homage to the Buddha and to bow in reverence. The World-honored One was tranquil and silent. He spoke not a word and his light did not appear. Worthy Ananda bowed and asked the Buddha,

"O Bhagavan, heretofore whenever you spoke the Dharma, awesome lights would naturally appear. Yet today among this great assembly there is no such radiance. There must be a good cause for this and we wish to hear the Bhagavan's explanation."

The Buddha remained silent and did not answer until the request had been repeated three times. He then told Ananda,

"After I enter Nirvana, when the Dharma is about to perish, during the Evil Age of the Five Turbidities,4 the way of demons will flourish. Demonic beings will become Shramanas; they will pervert and destroy my teachings. Wearing the garb of laypersons they will prefer handsome clothes and their precept sashes will be made of multi-colored cloth. They will use intoxicants, eat meat, kill other beings and they will indulge in their desire for flavorful food. They will lack compassion and they will bear hatred and jealousy even among themselves.

At that time there will also be Bodhisattvas, Pratyeka Buddhas, and Arhats who will reverently and diligently cultivate immaculate virtue. They will be respected by all people and their teachings will be fair and egalitarian. These cultivators (of the Way) will take pity on the poor, they will be mindful of the aged and they will save and give counsel to those people they find in difficult circumstances. They will at all times exhort others to worship and to protect sutras and images (of the Buddha). They will do meritorious deeds, be resolute and kind and never harm others. They will forsake their bodies for others' benefit. They will hold no great regard for themselves but will be patient, yielding, humane and peaceful.

If such people exist, the hordes of demonic Bhiksus will be jealous of them. The demons will harass them, slander and defame them, expel I them from their midst and degrade them. They will ostracize the good monks from the (monastic) community. Thereafter these demons will not cultivate the way-virtue.5 Their temples and monastic buildings will be vacant and overgrown with weeds. For want of care and maintenance their way-places will drift into ruin and oblivion. The demon is Bhiksus will only be greedy for wealth and will amass great heaps of goods. They will refuse to distribute any of it or to use it to gain blessings and virtue.

At this time, the evil monks will buy and sell slaves to till their fields and to slash and burn the mountain forests. They will do harm to living creatures and they will feel not the least bit of compassion. These slaves will themselves become Bhiksus and maidservants will become Bhiksunis.   Totally lacking in way virtue, these people will run amok, indulging in licentious behavior. In their turbid confusion they will fail to separate the men from the women (in the monastic communities). From this generation on, the Way will be weakened. Fugitives from the law will seek refuge in my Way, wishing to be Sramanas but failing to observe the moral regulations. The precepts will continue to be recited twice a month, but in name alone. Being lazy and lax, no one will want to listen any longer. These evil Sramanas will be unwilling to recite the sutras in their entirety and they will make abbreviations at the beginning and at the end of the texts as they please. Soon the practice of reciting sutras will stop altogether. Even if there are people who recite texts they will be unlettered, unqualified men who will insist, nonetheless, that they are correct. Bumptious, arrogant, and vain, these men will seek fame and glory. They will display elegant airs in the hope of attracting offerings from other people.

When the lives of these demonic Bhiksus come to an end their essential spirits will fall into the Avici6 Hells. Having committed the Five Evil Sins,7 they will suffer successive rebirths as hungry ghosts and as animals. They will know all such states of woe as they pass on through aeons as numerous as the sands on the banks of the Ganges River. When their offenses are accounted for they will be reborn in a borderland where the Triple Jewel is unknown.

When the Dharma is about to disappear, women will become vigorous and will at all times do deeds of virtue. Men will grow lax and will no longer speak of the Dharma. Those genuine Sramanas they see will be looked upon as dung and no one will have faith in them. When the Dharma is about to perish, all the Gods will begin to weep. Rivers will dry up and the five grains will not ripen. Epidemic diseases will frequently take the lives of multitudes of people. The masses will toil and suffer while the local officials will plot and scheme. No one will adhere to principles. Instead, all people will take delight in the ensuing chaos. Evil people will be ever more numerous like the sands of the ocean-bed. Good persons will be hard to find; at most there will be one or two. As the aeon comes to a close, the revolution of the Sun and the Moon will grow short and the lifespan of men will decrease. Their hair will turn white at the age of forty years. Because of excessive licentious behavior they will quickly exhaust their seminal fluids and will die at a young age, usually before sixty years. As the lifespan of males decreases, that of females will increase to seventy, eighty, ninety, or one hundred years.

The great rivers will rise up in disharmony with their natural cycles, yet people will not take notice or feel concern. Extremes of climate will soon be taken for granted. Beings of all races will mix together at random, without regard for the noble and the mean. They will alternately sink and float like feeding aquatic creatures.8

Then there will be Bodhisattvas, Pratyeka Buddhas and Arhats who will gather together in an unprecedented assembly because they will all have been harried and pursued by the hordes of demons. They will no longer dwell in the assemblies but the Three Vehicles9 will retreat to the wilderness. In a tranquil place they will find shelter, happiness, and long life. Gods will protect them and the moon will shine down upon them. The Three Vehicles will have an opportunity to meet together and the Way will flourish. However, within fifty-two years the Surangama Sutra and the Pratyutpanna Samadhi10 will be the first to change and then to disappear. The twelve divisions of the canon will gradually follow until they vanish completely, never to appear again. Its words and texts will be totally unknown ever after. The precept sashes of sramanas will turn white of themselves. When my Dharma disappears it will be just like an oil lamp, which flares, brightly for an instant just before it goes out. So too, will the Dharma flare and die. After this time it is difficult to speak with certainty of what will follow.

So it will remain for the next ten million years. When Maitreya is about to appear in the world to become the next Buddha, the planet will be entirely peaceful. Evil vapors will have dissipated, rain will be ample and regular, and crops will grow abundantly. Trees will grow to a great height and men will grow to be eighty feet tall. The average lifespan will extend to 84,000 years. It will be impossible to count all the beings who will be taken across to liberation."

Worthy Ananda addressed the Buddha, "What should we call this Sutra and how shall we uphold it?"

The Buddha said, "Ananda, this sutra is called The Ultimate Extinction of the Dharma. Tell everyone to propagate it widely; the merit of your actions will be measureless, beyond reckoning."

When the four-fold assembly of disciples heard this Sutra they grieved and wept. Each of them resolved to attain the true path of the Supreme Sage. Then bowing to the Buddha, they departed.

2. Colophon reads: From the records of Seng Yu. Translator anonymous. Currently appended to the Sung records.

S. Way-virtue. Tao te 道德, wholesome qualities that accrue by one who cultivates the Way of the Buddha.

6. Avichi Ch. wu chien 無間 uninterrupted. The lowest level of the lowest. hells. The suffering of the beings there is unending.

7. Five cardinal sins. These are offenses for which there is no expiation. Sangha members who commit the Five Cardinal Sins must disrobe. They are: 1) Killing one's father, 2) Killing one's mother, 3) Killing an Arhat, 4) Spilling the blood of the Buddha, 5) Causing a schism in the Sangha.

9. Three Vehicles. The Three Vehicles are the levels of spiritual attainment of the Bodhisattvas, the Pratyeka Buddhas, and the Arhats.

10. SURANGAMA SUTRA and the pratyutpanna samadhi. The Shurangama Sutra is a major Mahayana Buddhist Sutra, acclaimed as the sutra that teaches one how to gain wisdom. (See introduction to this translation). The pratyutpanna samadhi is known as the ”Standing Buddha Samadhi" and refers to a meditational trance that results from a method of practice which involves long periods of standing erect without ever sitting or reclining. 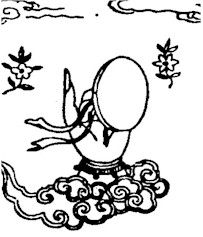